Email Us
Menu
Email Us
News

Peripheral arterial disease (PAD) is characterized by reduced blood flow in the arteries of the lower extremities, due to atherosclerotic occlusive disease. With over 200 million people now affected by the disease worldwide, it is the third leading cause of atherosclerotic vascular morbidity following stroke and coronary heart disease (Fowkes et al. 2013). There are several risk factors associated with the incidence of PAD including smoking, hypertension, diabetes, and obesity. The femoropopliteal region accounts for more than 60% of treated PAD cases, and symptoms can range from pain in the affected limb through to critical limb ischemia (CLI) with the risk of tissue necrosis and amputation.

Current treatments for PAD vary depending on the location and severity of the obstruction as well as the patient’s suitability for surgical intervention. Percutaneous vascular intervention (PVI) is usually favored over open surgery due to the reduced demand on the patient and the patients’ preference for minimally invasive techniques (Sanders et al. 2021). There are many PVI treatment options available, and currently there is no universally applicable treatment, as all currently approved, commercially available interventions suffer from a lack of long-term durability. The main cause of failure of these treatments is restenosis, due to intimal hyperplasia which is driven by an inflammatory response to the physical distension of the vessel wall and resultant damage caused by the intervention (Tan et al. 2021).

In an attempt to mitigate restenosis, the use of drug-eluting stents (DES) and drug-coated balloons (DCB) has increased significantly in recent years, with many studies demonstrating a significant improvement in patency compared with bare-metal stents (BMS) and plain old balloon angioplasty (POBA). However, longer-term follow up of PAD patients beyond 12 months has shown that their performance is no better than POBA or BMS (Tadwalkar, et al. 2015). Most drug-coated devices approved for the treatment of PAD are coated with paclitaxel, a very potent cytotoxic agent, but this potent cytotoxicity is proving to be a double-edged sword. The mechanism of action of the eluted cytotoxic drugs is to limit the growth of cells in the arterial wall. This not only inhibits the target cell growth but also delays normal tissue repair such as reendothelialization of the vessel wall or can cause local tissue necrosis. A trial comparing paclitaxel-coated balloons (PCB) with POBA had to be stopped due to an observed increase, from four per cent in POBA to eight per cent with PCB, in the number of amputations in the presence of the drug (Zeller et al 2014). A more recent systematic review and meta-analysis by Katsanos et al. (2018) reported a statistically significant increase in late all-cause mortality out to 5 years post-treatment, although no causal relationship was identified. This led the FDA to issue the first of several formal letters in January 2019 (FDA, 2019) to all health care providers, alerting them to the finding of increased all-cause mortality. In June 2019 the FDA convened a public meeting of the Circulatory System Devices Panel of the Medical Devices Advisory Committee and presented their own findings, which concurred with the original report by Katsanos et al. (2018).

More recent studies have failed to show a similar association with paclitaxel-coated devices, and though encouraging, they are limited by the duration of the follow-up, typically less than three years (Farb et al. 2021). This underscores the importance of the FDA’s recommendation to continue diligent long-term monitoring of patients who have been treated with paclitaxel-coated devices. In another study conducted in Germany using real-world data from over 37,000 patients, who underwent FP interventions over an eight-year period, it was demonstrated that patients treated with drug-coated devices had improved overall survival at five years when compared to a group of patients treated with POBA (Behrendt et al. 2020).

Many similar studies are underway and in time may provide a clearer understanding of the precise level of risk, a mechanism for the observed mortality signal, or identify specific populations where the risks are amplified. The debate still simmers as Katsanos and co. followed up their earlier 2018 article with another systematic review in 2021 suggesting an increased risk of amputations (from three to four per cent) in DCB-treated patients compared with POBA (Katsanos et al. 2021). Nonetheless, the FDA still recommends considering the use of drug-coated devices for patients at high risk of restenosis or repeat intervention.

Notwithstanding the recent controversy with paclitaxel, the high incidence of restenosis in PAD patients, compared with patients with coronary artery disease, is concerning and has been highlighted in several publications (Lee et al. 2016; Kokkinidis & Armstrong 2020; Tan et al. 2021). There are many perspectives on the reason for this difference. Factors might include the location, size and anatomy of the peripheral arteries compared with coronary and larger arteries. However, it appears clear that a different approach to the treatment of PAD is required to overcome the poor patency rates associated with the current paradigm.

With the established evidence for a role of inflammatory mediators such as cytokines and growth factors in the cause of restenosis (Libby et al. 2012, Maleknia et al. 2020; Tan et al. 2021), it has been proposed that a more targeted approach using immune-modulating biologicals/drugs instead of non-specific cytotoxic agents could more effectively reduce restenosis in PAD (Razavi et al. 2018; Maleknia et al. 2020; Tan et al. 2021). Razavi and co. showed in a human trial that the delivery of dexamethasone to the vessel adventitia, at the site of the intervention, was effective at reducing restenosis. A macrophage-directed approach has been proposed by Tan et al., suggesting that one or more cytokines such as TGF-b, IL-4 or IL-10, delivered locally at the site of stent insertion to treat a peripheral occlusion, may help to maintain a more anti-inflammatory (M2) phenotype in the recruited macrophage population, which would promote endothelial repair and reduce the likelihood of restenosis. While there may be great potential for the development of newer active-coated vascular devices, the task is a challenging one. The immune cells and the interplay of secreted factors at the site of vessel wall injury are very complex (Maleknia et al. 2020) and delivering the correct dosage of a factor equally demanding. Furthermore, the regulatory path becomes more arduous when a device is coated or combined with a biologically active molecule.

TekCyte has a novel coating technology that may provide a simple and unique solution to the problem of stent failure associated with the treatment of PAD. TekCyte’s coating – BIOINVISIBLE™ – is a highly hydrophilic polymer that is chemically bound to the surface of a device, providing a ‘protective’ barrier to the body’s normal defenses against foreign materials. BIOINVISIBLE™ is based on a hyperbranched polyglycerol that is ultra-thin ( less than 10nm), extremely stable and with no evidence of toxicity (Abbina et al. 2017; Jafari et al. 2020). The patented coating process is easily scalable and has recently been scaled up in TekCyte’s manufacturing facility in Adelaide, Australia.

Extending the testing to clot formation, the development team has amassed considerable data showing the significant reduction in the level of thrombosis with coated stents using fresh human blood in the Chandler loop model. Images of the surface of nitinol stents and vascular grafts show dramatically reduced attachment of platelets to the surfaces, with a concomitant reduction in the formation of fibrin clots. Figure 1 below shows the obvious lack of thrombosis on a nitinol stent coated with BIOINVISIBLE™ compared with the equivalent bare metal stent. High power magnification of the stent struts confirms the lack of any fibrin clots on the coated stent.

The results in the Chandler loop have been verified using multiple blood donors and with various commercial stents. In the same studies, BIOINVISIBLE™ did not activate the complement cascade and in separate laboratory studies, BIOINVISIBLE™ showed no signs of cytotoxicity to blood cells and other cell types. 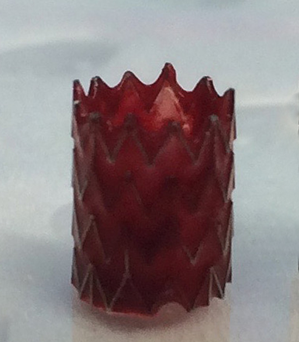 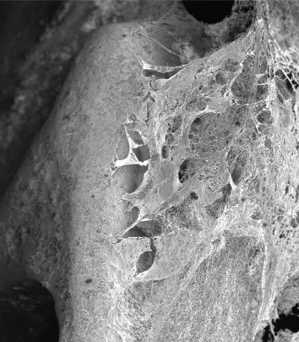 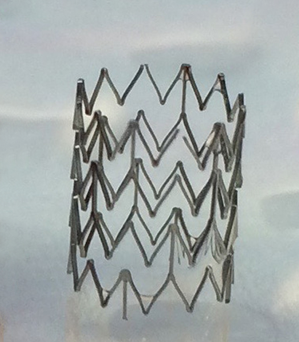 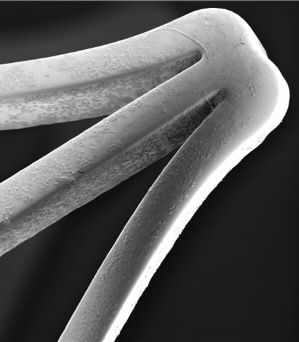 BIOINVISIBLE™ has great potential as a truly biocompatible coating for vascular devices. The very thin nature of the coating makes it suitable for coating the finest of device structures without interfering with their architecture and movement. The coating is also very robust and able to withstand the insertion of a coated stent into a stent delivery device. The coating’s anti-thrombogenic property is also unaffected when the same packaged nitinol stents are EO-sterilized and stored at room temperature for up to 3 years.

A study conducted in adult pigs showed that BIOINVISIBLE™ did not interfere with the normal regrowth of the vessel endothelium over the nitinol struts of coated stents placed in either the iliofemoral artery or iliofemoral vein. The image in Figure 2 shows the endothelium growing normally over the coated stent strut in the artery, within 5 days. 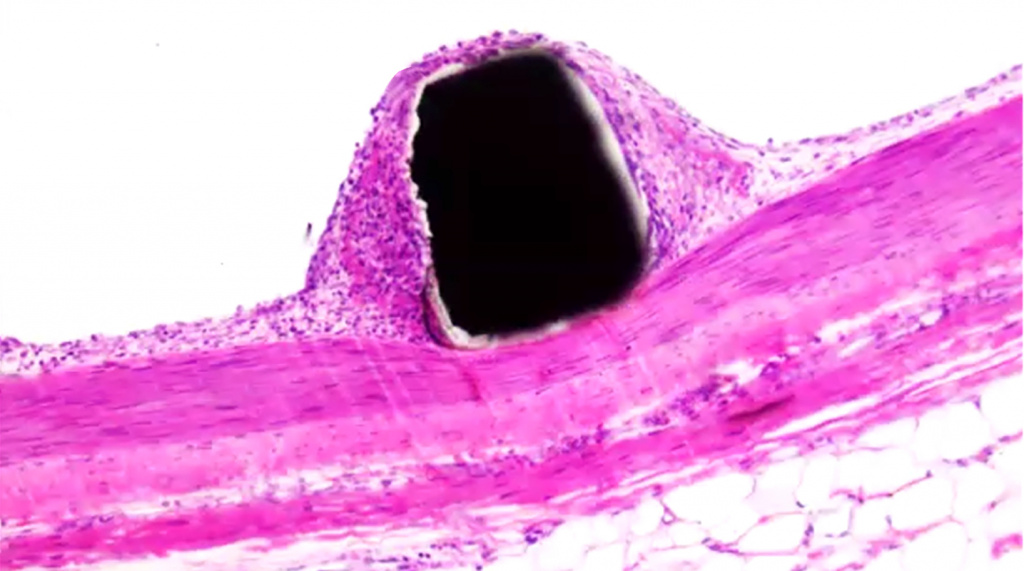 Figure 2: BIOINVISIBLE™ does not interfere with normal endothelial regrowth.

Using an established ApoE knock-out mouse model of restenosis (Ali et al. 2007; Vanags et al. 2018), BIOINVISIBLE™ dramatically reduced the level of restenosis in coated stainless-steel stents compared with uncoated stents. This result and the mechanism of action is the subject of ongoing investigations but strongly suggests that BIOINVISIBLE™ is an attractive and safe alternative medical coating to reduce both stent thrombosis as well as restenosis in stents used to treat PAD.

The advantage of TekCyte’s coating is the absence of a drug-eluting component, which removes the problem of tissue toxicity due to the eluted drug and any possibility of emboli from drug-coating particulates. This simple technology also allows for a rapid regulatory and manufacturing path to market.

TekCyte’s BIOINVISIBLE™ coating represents a disruptive medical advance, that has the potential to improve patency and durability of peripheral vascular therapies. 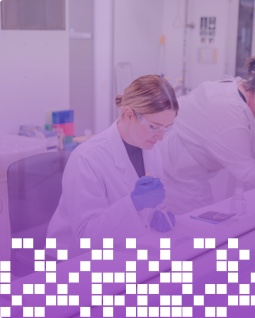